With 11 PGA TOUR events canceled due to the pandemic this year, the Vardon Trophy will reduce the minimum number of required rounds played from 60 to 44, with no incomplete rounds, in events co-sponsored or designated by the PGA TOUR. The adjusted score is computed from the average score of the field at each event.

Founded in 1937, the Vardon Trophy is named in honor of legendary British golfer Harry Vardon and has been presented annually to the touring professional with the lowest adjusted scoring average.

The PGA of America Player of the Year Award is presented to the top TOUR professional based on a point system for tournament wins, official money standings and scoring averages. Points for the 2019-20 season began with A Military Tribute at the Greenbrier on Sept. 12, 2019, and conclude Sept. 7, 2020, at the TOUR Championship.

The PGA Player of the Year Award, first presented in 1948 by the PGA, will be based this year using the remaining 35 regular Tour events and just one major championship – the PGA Championship – due to The Open Championship being canceled in April and the U.S. Open and Masters rescheduled to late fall.

The PGA TOUR also recognizes its annual Player of the Year, with the winner announced in September, determined by a vote of the membership.

Previous Article THE WARREN GC: COME WAKE UP THE ECHOES OF NOTRE DAME

About the Author From Staff Reports 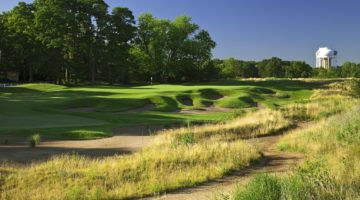