Richerson Elected 42nd President of the PGA of America

The Legacy could be Nashville Area’s Best Golf Value

“With Los Cabos being the fastest growing destination in Mexico, it’s our priority to continue to expand accessibility for travelers across the United States from east to west,” said Rodrigo Esponda, Managing Director of the Los Cabos Tourism Board. “We are pleased to work with American Airlines on the three new direct routes to Los Cabos from New York, Sacramento and Austin. We can’t wait to welcome many more first-time visitors to experience our world-class destination.”

Headquartered in Fort Worth, Texas within the Dallas-Fort Worth metroplex, American, together with its regional partners, operates an extensive international and domestic network. DFW, its largest hub, serves as American’s primary gateway to Mexico. In December, American will fly to 23 destinations in Mexico from DFW.

The airline will increase service to SJD from DFW with up to five daily flights on a Boeing 737 between December and April. American also intends to operate daily service from their large hub on the east coast, Charlotte (CLT), with daily service during the winter season.

American continues its expansion in Mexico and recently announced the launch of two new destinations in the country–La Paz and Loreto. Both destinations will connect to the airline’s hubs in DFW and Phoenix (PHX).

“We are thrilled about our two new destinations in Mexico, La Paz and Loreto, as well as continuing to grow our seasonal service to popular destinations such as Los Cabos, Cancun and Puerto Vallarta,” said Jose María Giraldo, Director Regional of American in Mexico, Central America, Colombia and Ecuador. “This growth shows our airline’s firm commitment to Mexico, where we have continued to operate uninterrupted service for almost 80 years.”

All flights are available for purchase on www.aa.com.

About the Author Golf Business News 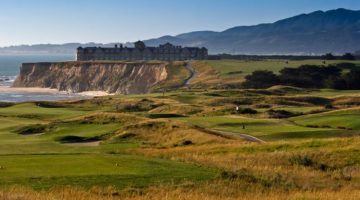